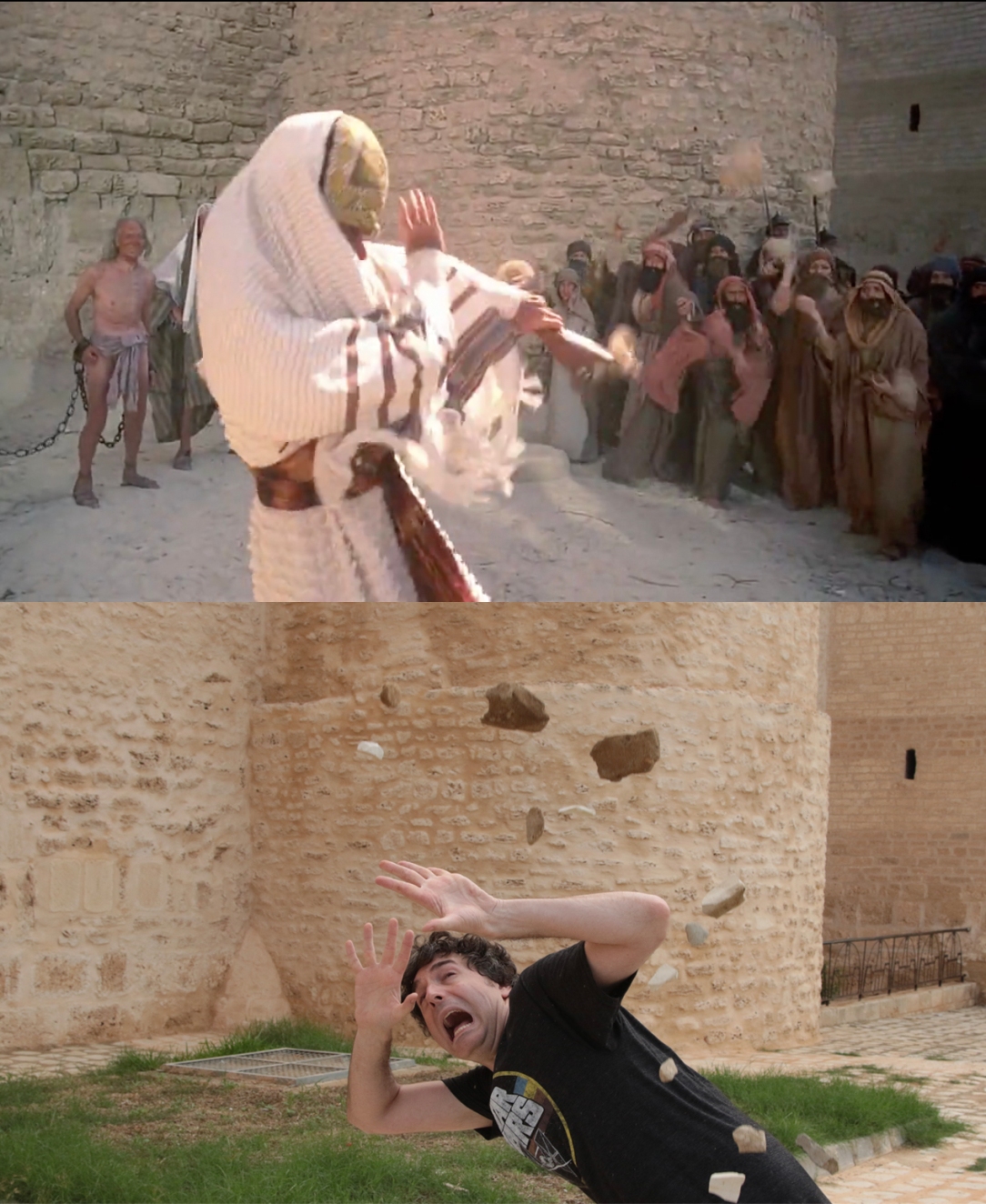 Recreating Scenes From “Life of Brian” In Tunisia! (Part 1)

Tunisia is famous for providing the backdrop for Star Wars and Raiders of the Lost Ark, but few are aware that it also stood in for Jerusalem in the Monty Python masterpiece Life of Brian. With very little data available online, it takes an especially obsessed kind of nerd to track down all the Brian filming locations. I happen to be that especially obsessed kind of nerd.

With a copy of Monty Python’s Tunisian Holiday by Kim “Howard” Johnson and Michael Palin’s Monty Python at Work, my friend Ryan and I embarked on the Ultimate Nerd Road Trip in pursuit of finding the legendary settings for all three of the aforementioned movies.

The closest Brian location to the capital city of Tunis is the 2nd century Roman theatre nestled among the ruins of ancient Carthage—a UNESCO World Heritage site with a rich and fascinating non-Python-related history that is well worth exploring. But more to the point: it was the location where Brian first meets the People’s Front of Judea! Ryan and I did our best to triangulate the spot where the PFJ were originally seated based on a few reference photos on our phones. It’s hard to be exact, but I think we were at least pretty close. 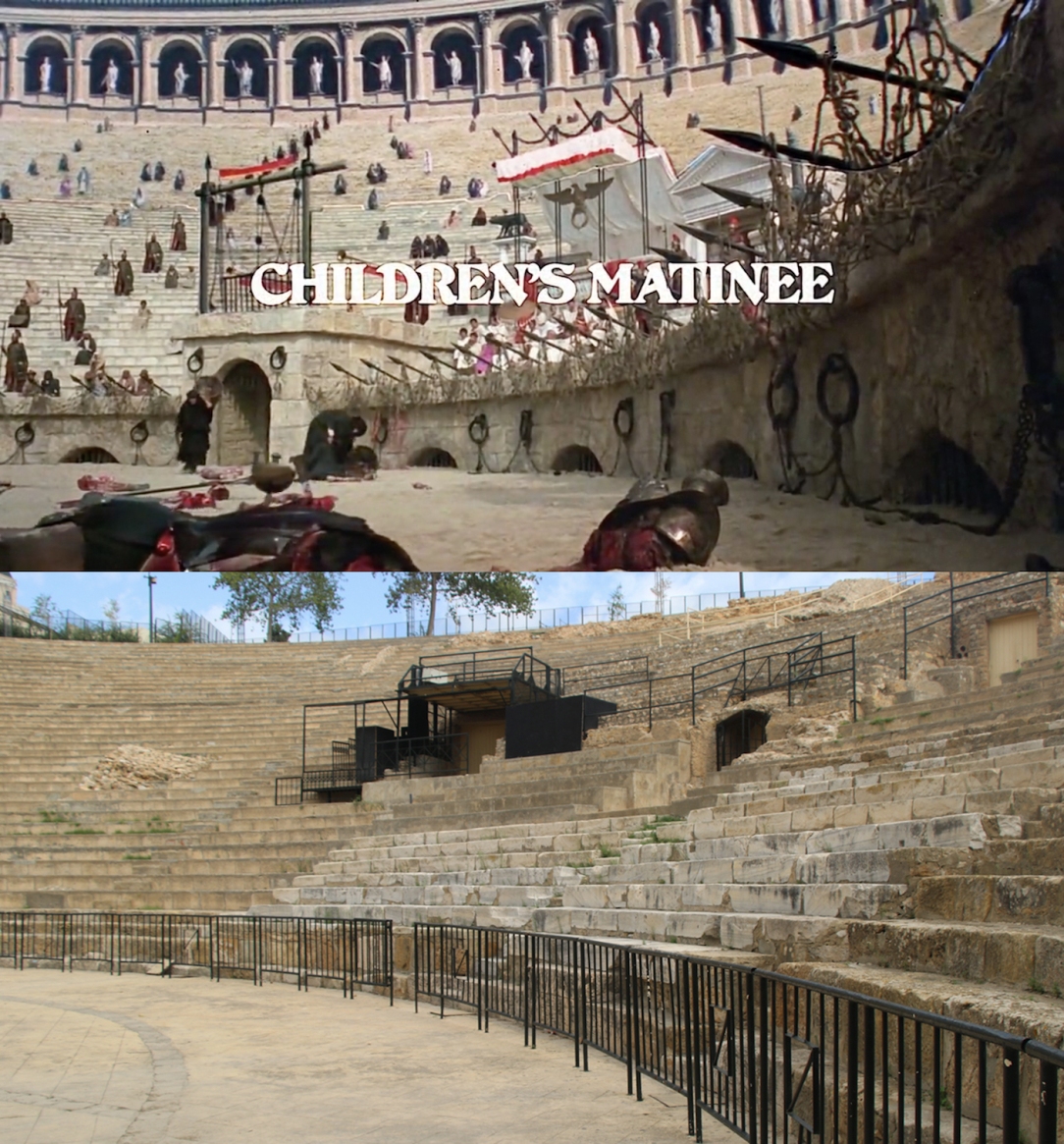 About two hours south of Tunis is the resort town of Sousse. Several scenes were filmed outside the walls of the city’s “Kasbah” (fortress) notably the “followers of the shoe,” the establishing shots of the walls of Jerusalem, and the reverse angle shots of the crucifixion scene at the end (even though the crucifixion shots were filmed in El Haddej…more on that in Part 2…).

Built in the 11th century, the Sousse Kasbah is mostly just an empty courtyard, but the lower level contains the Sousse Archaeological Museum, which is full of ancient Roman mosaics. The museum was closing by the time we arrived, but we did take a moment to soak in at least a few of the more impressive pieces, particularly an enormous mosaic portrait of Medusa. 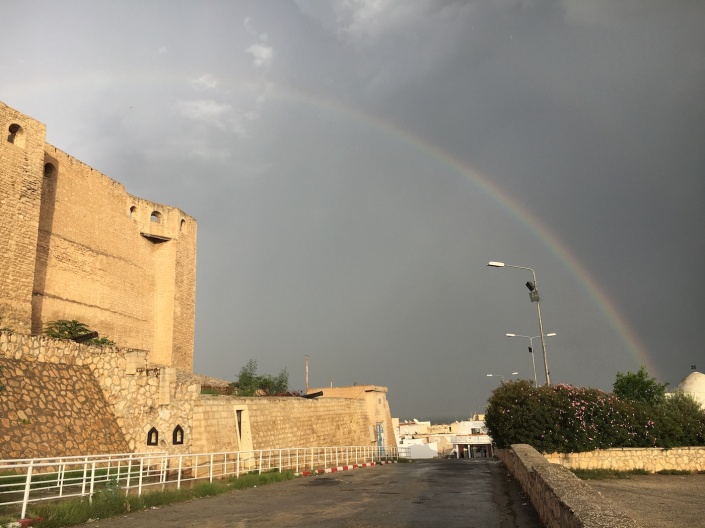 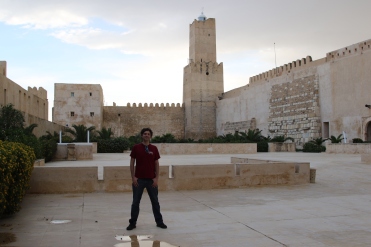 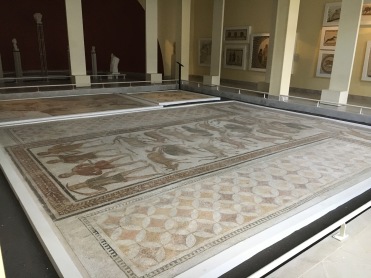 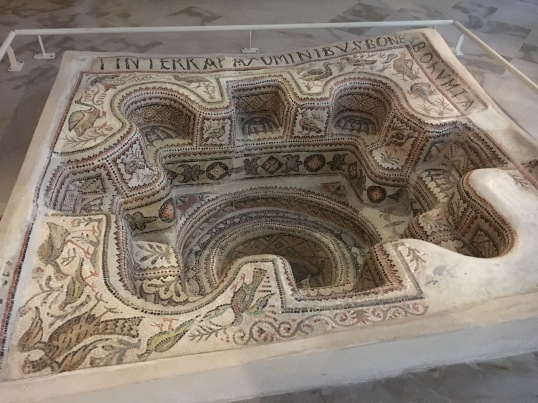 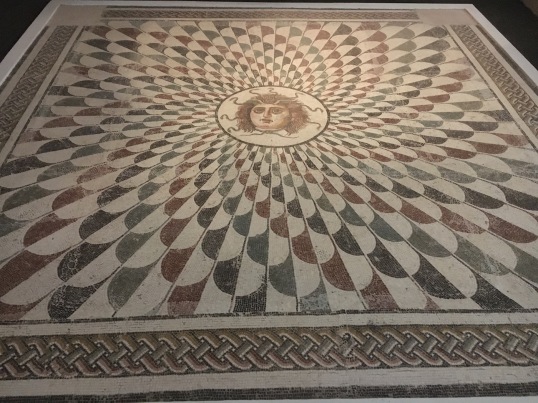 The bad news is that the Kasbah’s Life of Brian locations are currently obscured by a recently added white wall. A stage and lighting rig are set up behind it—I assume it’s used as an outdoor performance space. We tried our best to find a way in, but settled for holding up a shoe just beyond the perimeter. 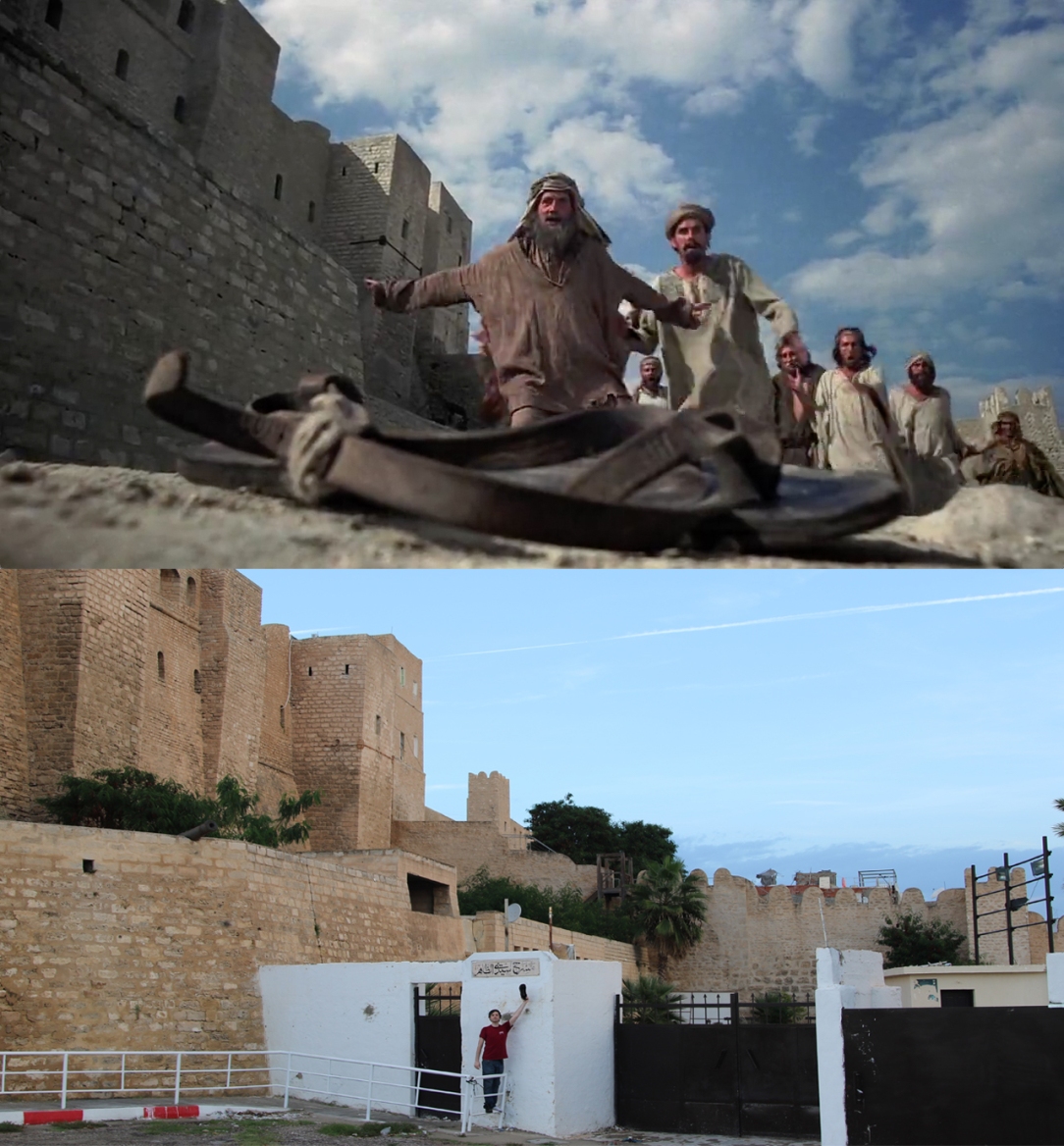 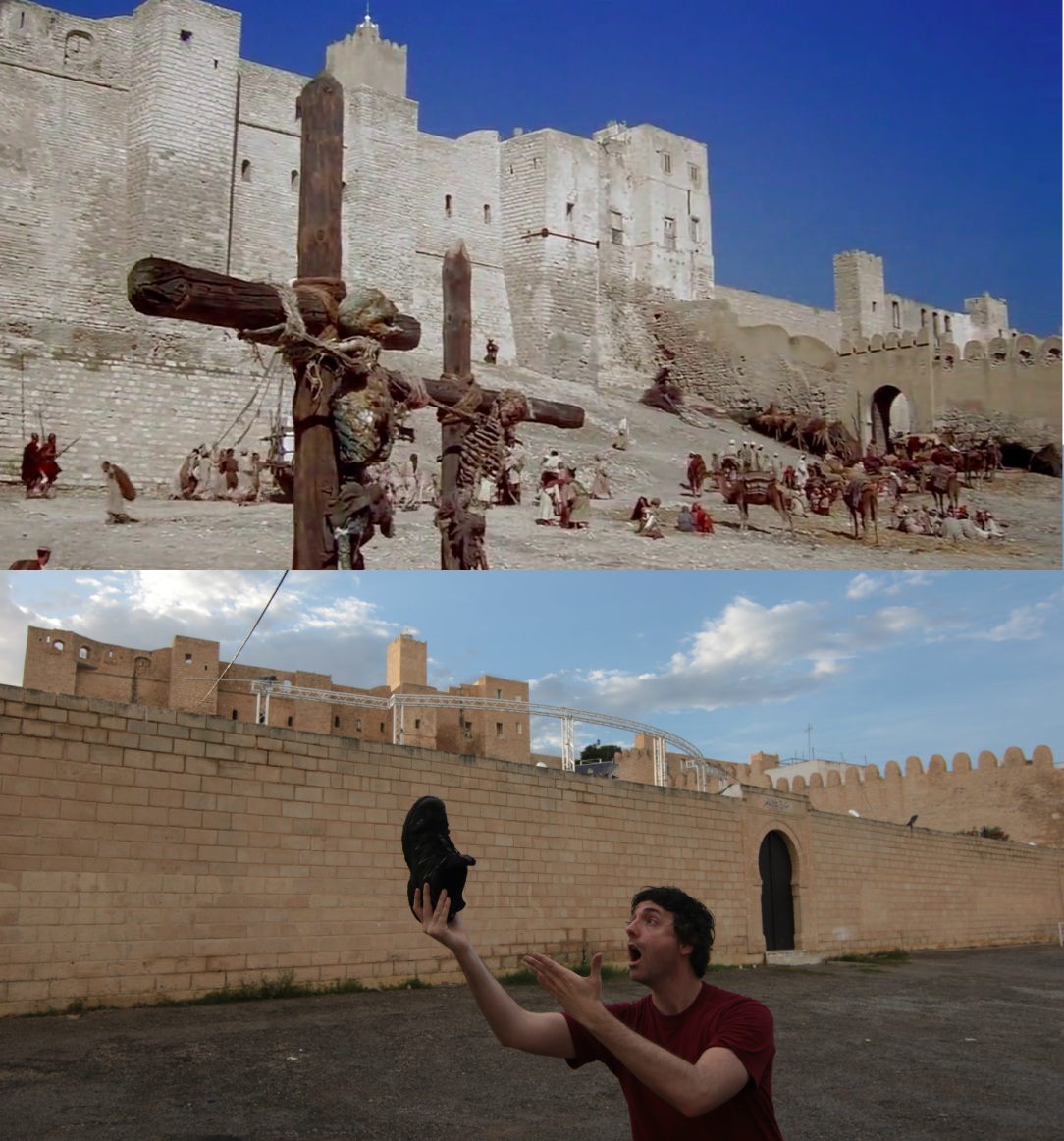 The bulk of Life of Brian, though, was filmed an hour south of Sousse in the town of Monastir. The main set was the courtyard of the city’s “Ribat” (like a Kasbah, but…different?), which dates back to 796 AD. 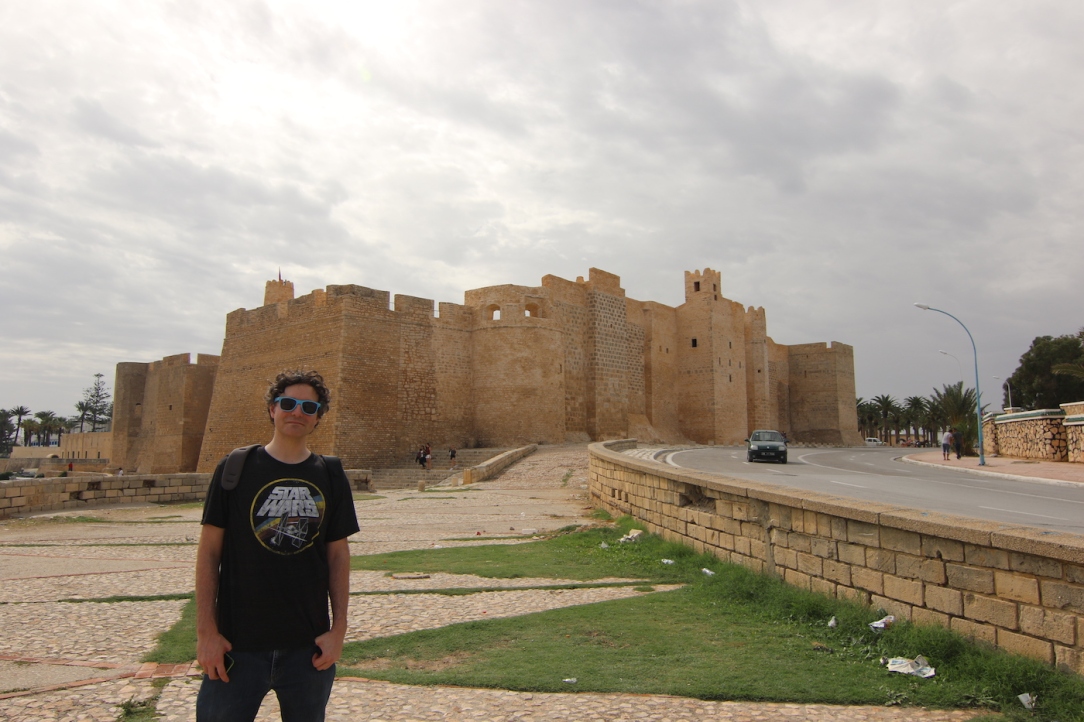 According to Michael Palin’s book, the very first scene they filmed for Life of Brian was the “stoning” scene, where John Cleese keeps saying “Jehovah” and getting pelted with rocks as a result. It’s also the first location we came to in Monastir, since it takes place along the outside wall of the Ribat. We set up our camera on a tripod, turned on the high-speed shutter, and took a burst of photos as I threw a bunch of rocks in the air and let them rain down on me. As I’m sure the Pythons discovered in a similar manner, humor often requires pain.

The Ribat is mainly a large courtyard and a tower, with a handful of hidden corners and a dozen or so small rooms. The Pythons created the illusion of an entire city within its walls by dressing up one corner of the Ribat, filming a scene, then turning the cameras around and dressing up another area differently to film something else. But the most recognizable courtyard location faces you immediately when you enter: the spot where Michael Palin as Pontius Pilate declares that he will “Welease Woger!” 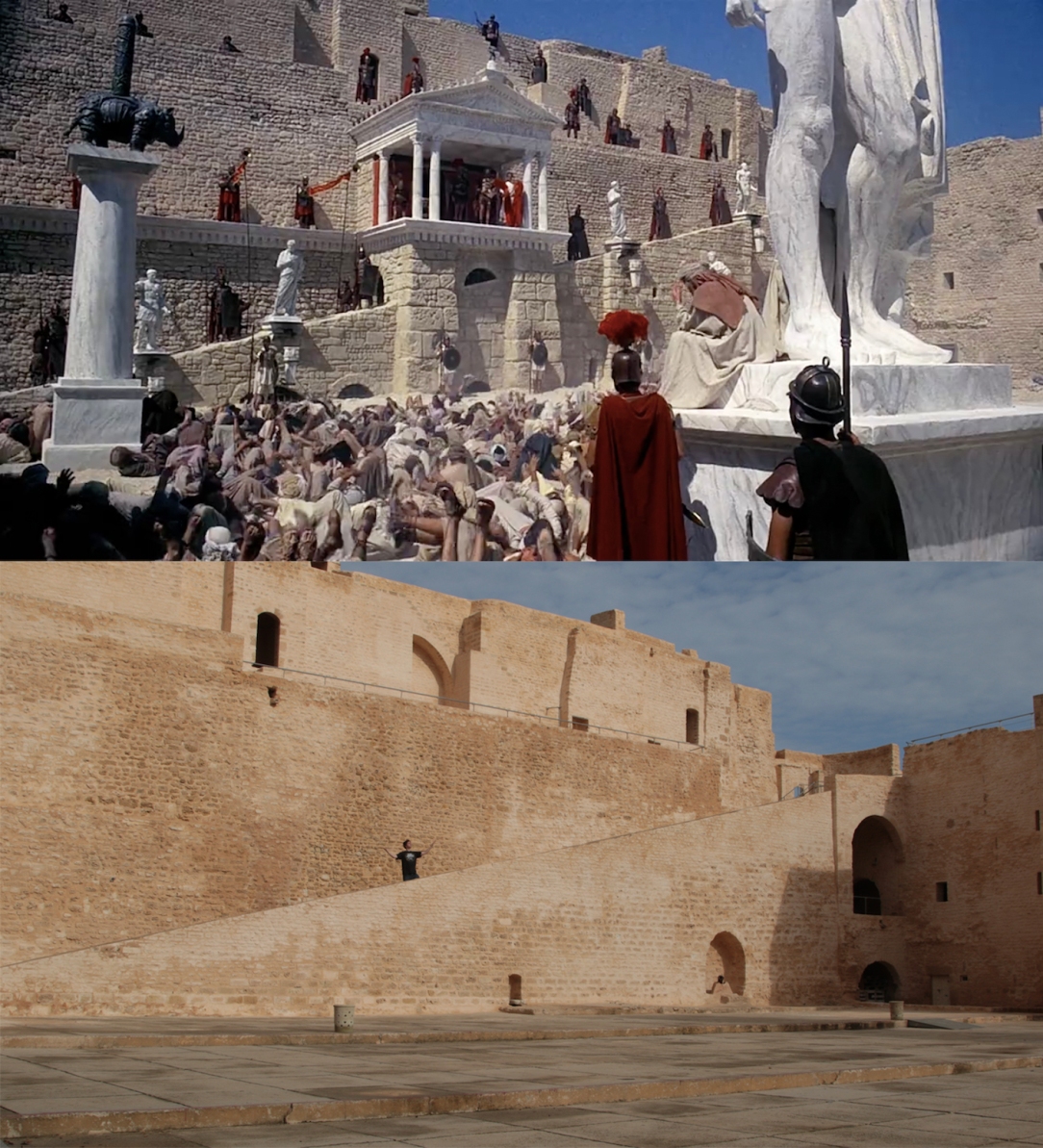 It took a more discerning eye to spot the location of Brian’s bedroom window, from which he addresses a crowd of followers and tells them they’re all individuals (to which they reply in unison: “Yes, we’re all individuals!”). 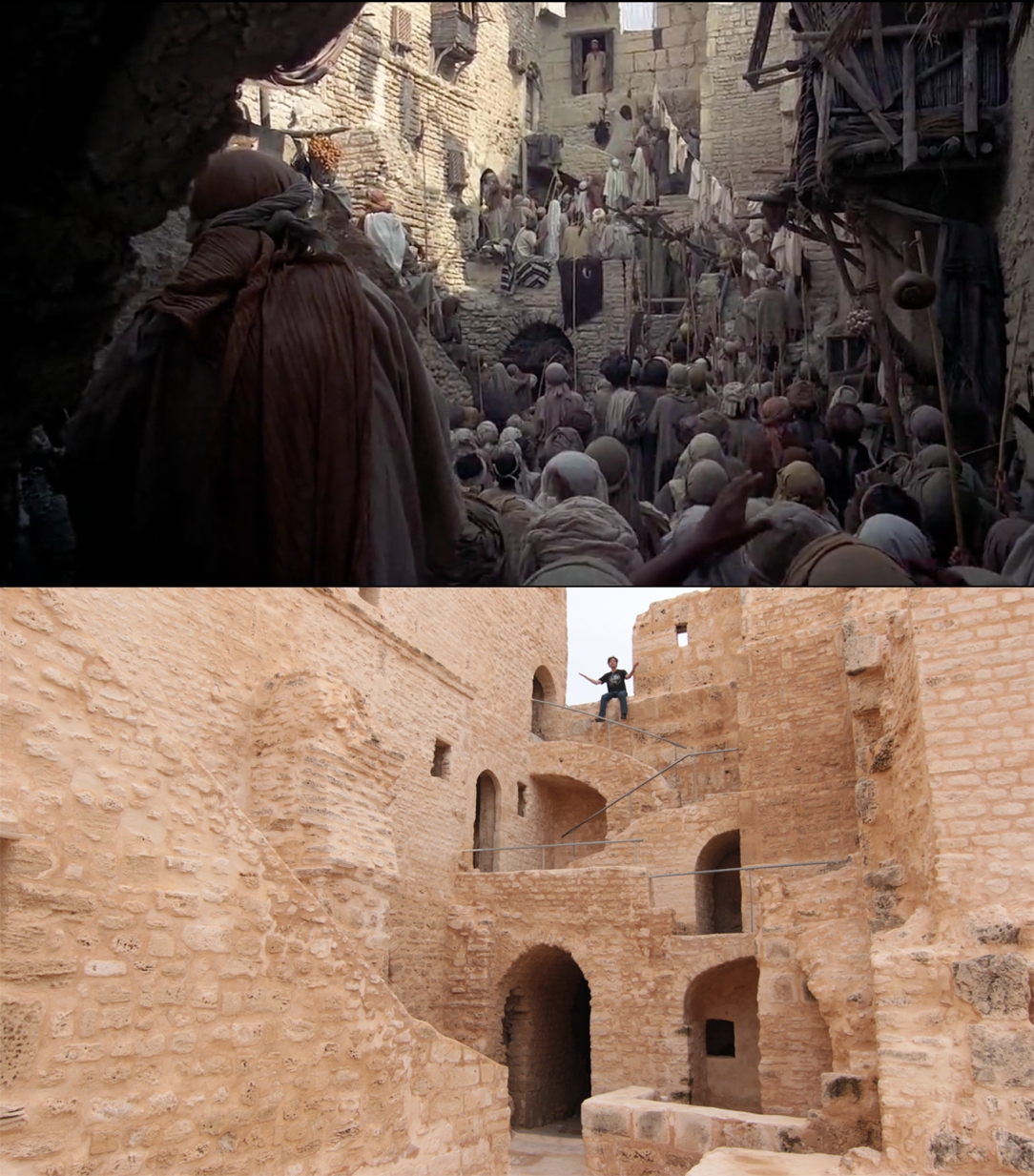 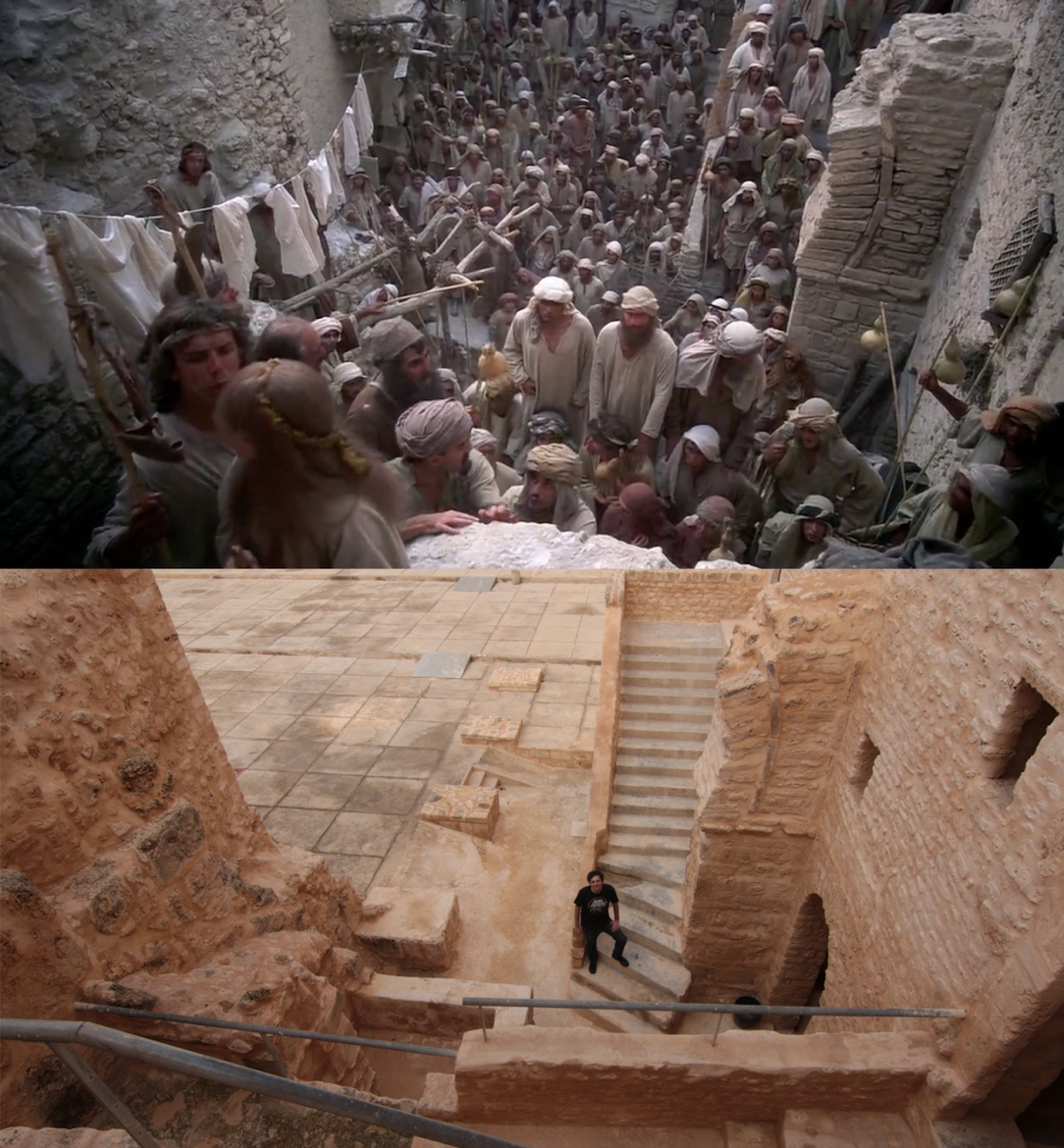 The Ribat’s tower was used in the scene where Brian is accidentally kidnapped by aliens, but it took us a while to figure out why our reference photo wasn’t lining up with reality. Finally it clicked: for some reason, they reversed the image on film. So we did the same thing to create this GIF of me falling out of the tower:

As we lined up our shots, some schoolchildren on a field trip were being escorted around the Ribat, and Ryan wondered out loud if we could somehow convince their teachers to get the kids to play extras as we re-created the “individuals” and “Woger” scenes. I figured there was no harm in asking…

The teachers were not only happy to oblige, despite a very limited understanding of what exactly we were doing, but they also acted as Assistant Directors, wrangling the kids and getting them to give us multiple takes (and even coaching their acting a bit). The kids were adorable and excited, and when we finished filming every one of them wanted to shake our hands, introduce themselves, and take our pictures.

If we had been there on any other day, or even at some other hour, I don’t know that we would’ve been able to make such amazing memories. 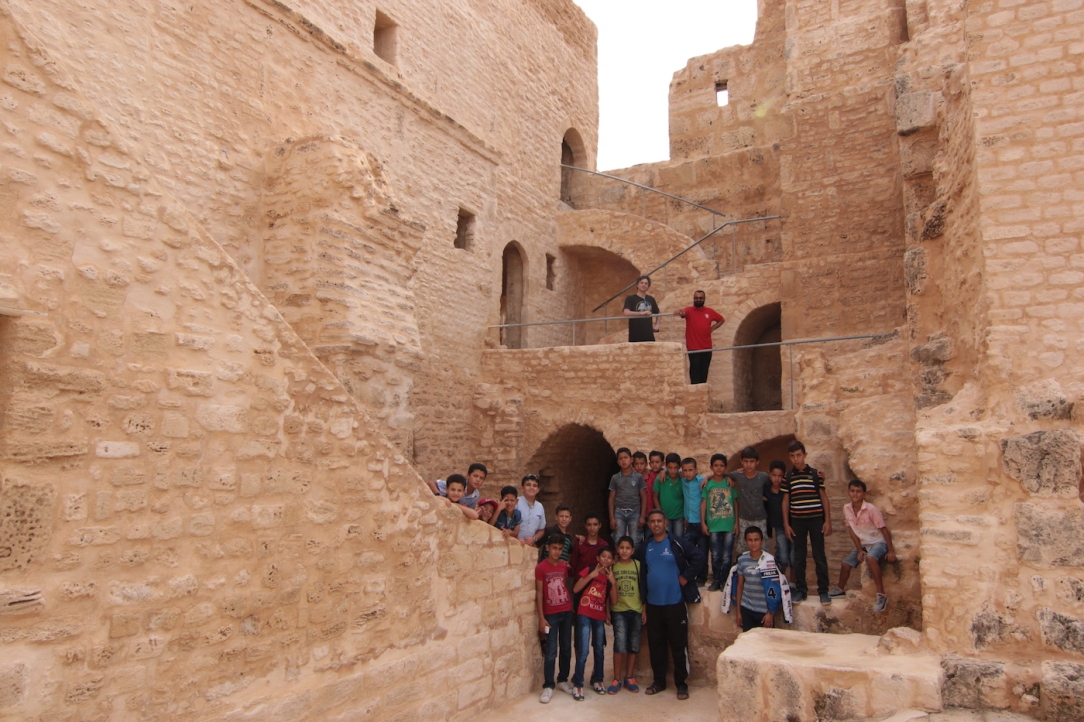 The only locations we had left to find were the “juniper bushes” scene and of course the site of the classic crucifixion finale, but despite all our research we couldn’t seem to pinpoint them.

It would take a miracle…and that’s what we received…

Click here to check out PART 2 for the unbelievable story!

5 comments on “Recreating Scenes From “Life of Brian” In Tunisia! (Part 1)” 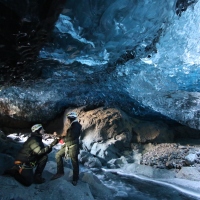 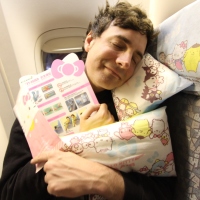 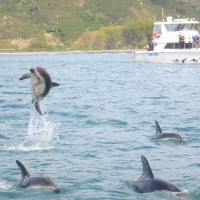 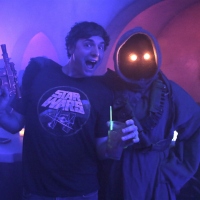 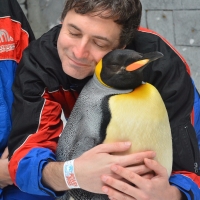 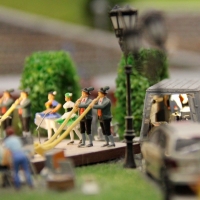 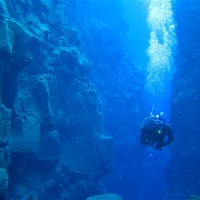 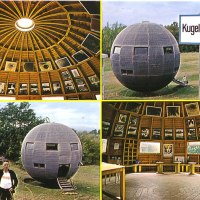